Some Thoughts on the Psalm of Nephi 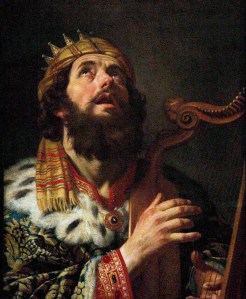 I LOVE the Psalm of Nephi. It’s one of my favorite passages in the Book of Mormon. It reminds me of how trustworthy and merciful God is, and how frail I am without Him.  But I haven’t always felt this way.  For a time, it was a baffling bit of scripture.  I struggled to fit it into a worldview that left little room for mistakes.

END_OF_DOCUMENT_TOKEN_TO_BE_REPLACED

“…For we know that it is by grace that we are saved, after all we can do…”

I remember staring at the page for hours on end, my stomach in knots.  I ran a quick check in my head to see how I’d fared that day, and felt my stomach tighten even more as I replayed my little crimes over and over again.  Every unkind word.  Every flash of anger.  Every dirty thought.

Why isn’t it possible, ever possible, I wondered, to do ALL I can do?

For several years, I struggled with the meaning of this verse–and with similar teachings prevalent in Mormonism–that forgiveness or salvation is granted only AFTER you have expended your energy doing the best you can on your own.

I mean, remember Stephen Robinson’s parable of the little girl who wants to buy a bicycle?  She works so hard and saves her pennies for weeks–but when she gets to the bicycle store, she realizes she’s still a hundred dollars short.

So the father in the story gets down on his knees and holds her close.  “You give me everything you have,” he says, “and a big hug and a kiss, and I’ll buy you that bike.”

It might sound nice on the surface, but when you’re a perfectionist, I can assure you…

After all, as a perfectionist, you’re never satisfied you’ve done “the best you can” anyway; as a result, you constantly feel as though you’ll never be right in the eyes of God.

So might I suggest an alternate reading to this verse in 2 Nephi, which seems to be one of the most frequently-cited scriptural supports for the Mormon concept of a works-based salvation?

Let’s go back and examine it in context.  In the verses prior, Nephi is bearing strong testimony of Christ; and even declares that there is no other name given under heaven besides Christ whereby man can be saved (see 2 Nephi 25: 20).

Then he goes on to say that BECAUSE of the cause of Christ, he (Nephi) has been commanded to write the teachings of God so His word can go forth from generation to generation.

And after all that, he says, “For we labor diligently to write, to persuade our children, and also our brethren, to believe in Christ, and to be reconciled to God; for we know that it is by grace that we are saved, after all we can do.”

Might Nephi be speaking, not of some vague, impossible standard that is “required” of humankind before God grants forgiveness and salvation, but of the efforts he and his brethren have put forth to write and persuade?

To rephrase it, might he be saying, “For we labor diligently to write, to persuade our children, and also our brethren to believe in Christ, and to be reconciled to God; for we know that after all we can do [to write and persuade], it is [ultimately] by the grace [of Christ] that we are saved.”

Framed this way, Nephi is NOT making a sweeping statement about the necessity of each man and woman to turn to Christ only AFTER you’ve done the best you can; but instead is acknowledging that the work he does is insufficient, for it is by GRACE that he is saved, even after all he does.

Though somewhat unorthodox from an LDS perspective, I believe this reading is much more in line with the rest of the scriptues when it comes to teachings on grace.

What do you think?  Am I up in the night?  Or am I on to something here?