← Some Thoughts on the Psalm of Nephi
Radical Freedom, Radical Grace Part 2: That Weak Things May Become Strong → 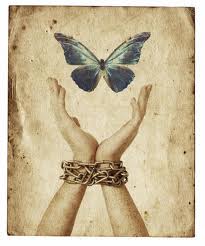 This is a post that’s been brewing for a really long time.  I’ve got bits and pieces written in fragment after fragment in my drafts folder.  It’s a big topic.  It’s an important one.  At the expense of sounding melodramatic, it pretty much sums up my entire philosophy for living on this planet with other people.

It’s too big a topic to cover comprehensively in a format like this, but I figured I’d at least try to articulate some of the most important philosophical underpinnings.  Then I’ll follow it up with a post on how this approach affects the way I interact with people.  For the record, this is a faith-based perspective that is deeply informed by my Mormon beliefs and my own experiences with God.

Quite simply, it goes like this: I believe in a world of radical freedom and radical grace.

Books upon books have been devoted to the issue of free will (or “agency” in Mormonspeak), but for me, it all boils down to something C.S. Lewis once said:

Free will, though it makes evil possible, is also the only thing that makes possible any love or goodness or joy worth having.

As human beings, we seem to intuitively understand that coerced virtue really isn’t virtuous.  Have you ever received a gift that was extended grudgingly?  I don’t know about you, but I’d rather not have the gift. Have you ever done something, not because you felt in yourself that you should, or because you really wanted to, but because there was some external pressure that essentially forced you to do it against your will?  It’s an unpleasant experience — and in serious or repetitive cases, one that can cause deep trauma and emotional scars.  (In fact, we often call this sort of thing “abuse.”)

Not to get all nerdy on you, but there’s a reason the Borg of Star Trek are such compelling villains (some of the most terrifying ever created):  they take away not only freedom of action, but freedom of thought through forced assimilation.  They eradicate freedom in the most intimate, personal spaces.  It’s horrifying.

Mormonism has a pretty fascinating explanation for why human freedom is so important.  As opposed to most of the Judeo-Christian world, which posits that we are God’s creations and could not exist without Him, Mormonism says that within each human being there is a spark of intelligence that can be neither created nor destroyed.  This is called being “self-existent,” a characteristic that most other believers on Earth impute only to God.

I don’t think most Mormons appreciate how radical this is.  We are “agents unto ourselves,”  not because of any external factor, but because of who we are.  We are free by virtue of our self-existence.  It is not something that even God can give or take away.

This is an earth-shattering concept of freedom, one that has profound implications about the nature and purpose of this life.

But in order to get to that, let’s take a little detour through the Garden of Eden.

Mainstream Christianity sees what happened to Adam and Eve in the Garden as a true Fall. A step in the wrong direction.  A major blunder that if Adam and Eve could have just avoided, we’d all be in Paradise now, and none of this ugly pain stuff would have ever happened.

But Mormonism says that without the Fall, there could be no progression.  That even though Adam and Eve introduced death, pain, and suffering into the world, they later rejoiced that they had done so:

And Adam blessed God and was filled…saying: Blessed be the name of God, for because of my transgression my eyes are opened, and in this life I shall have joy, and again in the flesh I shall see God.

And Eve, his wife, heard all these things and was glad, saying: Were it not for our transgression we never should have had seed, and never should have known good and evil, and the joy of our redemption, and the eternal life which God giveth unto all the obedient.

And Adam and Even blessed the name of God, and they made all things known unto their sons and their daughters.

It’s kind of a startling thing to hear people praising God for their mistakes!  But maybe Adam and Eve were on to something…

(NOTE: I dare someone to give this a go in Sunday School this week and then report back to me on the reaction: “Thank Thee, Father, for the chance to come down here and make a royal mess of it…”)  🙂

You see, if we really believe that we are free agents by virtue of our self-existence…and if we really believe that the Fall was a good thing, because it meant that human beings have the chance to learn by their own experience to distinguish good from evil…then doesn’t it follow that we must leave room for people to actually have those experiences?

We must accept weakness, imperfection, sin, and frailty as necessary conditions of this life.

In fact, as Mormons, we believe in a God who was so intent on honoring our freedom to choose, that He sent His Son to suffer with us — so that He might know, according to the flesh, how to succor us in our time of need (a need that would come hard and fast and often, due to the consequences of our own choices).  THAT is how deeply He respects us as free agents.

And step-by-step, line upon line, He works with us to change our hearts and lives.

I believe that’s an expression of radical grace, for we haven’t really “earned” His favor.  On the contrary, we screw up time and time again.  But because there is something fundamentally important about learning from our mistakes, He helps us put it back together again…if we let Him.

That’s how free, self-existent agents who were made to be like God get to be more and more like God.

I believe this is an important dinstinction from narratives that say it is by our good choices alone that we become perfected.  Here, I’m making the case that it is actually through our experience of both bad AND good that God works with us and in us to perfect us.  I also believe that if we really internalized our belief in this kind of radical freedom and radical grace, we’d become some of the kindest, most accepting, most forgiving people on the planet…but I’m getting ahead of myself.  🙂  In my next post, I’ll share how this can affect the way we interact with others.

In the meantime, I’d love to hear your feedback on some of the thoughts I’ve shared.  Please feel free to make comments below!

A doubter by nature, a believer by grace.
View all posts by Katie L »

← Some Thoughts on the Psalm of Nephi
Radical Freedom, Radical Grace Part 2: That Weak Things May Become Strong →